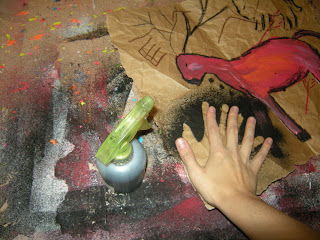 how hands are sprayed 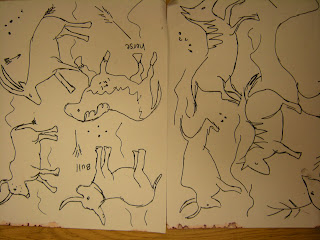 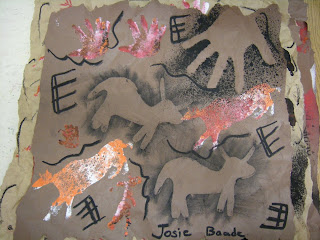 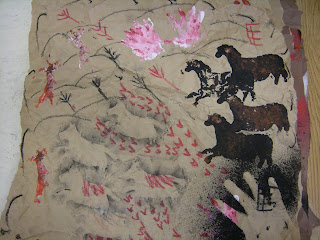 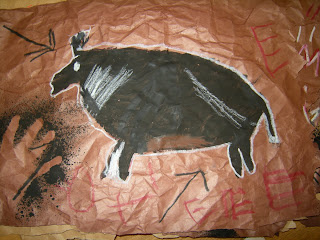 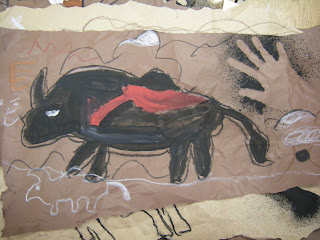 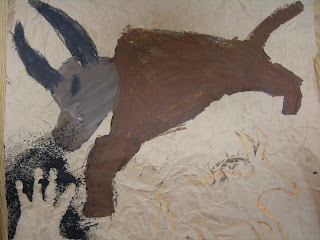 
In Art class, 2nd graders learned about the first art form, cave painting created during the Paleolithic period. Students learned that the purpose of the Paleolithic cave paintings is not known. The evidence suggests that they were not merely decorations of living areas, since the caves in which they have been found do not have signs of ongoing habitation. Also, they are often in areas of caves that are not easily accessed. Some theories hold that they may have been a way of communicating with others, while other theories believe they are for a religious or ceremonial purpose.

We visited (via technology) the cave of Lascaux, France. The images drawn and painted on the cave walls were created around 15,000 years ago!
Students then created their own cave painting using tempera paints, oil pastels and chalk!
Day 1: talk about cave painting, tell story of how the boys found the Lascaux caves. Pass out cave animals visual sheets. Students have to draw one large animal w/pencil. Next, students paint w/earth tone colors (we talk about how paint was made back then).

Day 2: review cave painting facts. Students add detail to artwork w/oil pastels (earth tone colors only). They have to outline painted animal and add shadow. We talk about some of the symbols drawn around the animals in the caves, some look abstract, some look like arrows. They can draw smaller animals if they wish. Then they come up to have me spray their hand. I use watered down tempera paint in a spray bottle. We talk about how the cave painters did the same technique w/their own handprints.

I also did this lesson w/4th grade but used different techniques. The 4th graders had to draw their own small stencil of an animal and use dark chalk to rub outwards onto paper. The rest of the details were done w/oil pastels and I also have a cave animal sponge kit. So I called them up by table to add animal sponge prints. They also got to have their hand sprayed. The first two examples you see are 4th grade, the rest 2nd grade. Hope this helps

Posted by Jenny Bartolazzi at 6:06 AM